Taking a break from my work temporarily. I will return after sharing my review on the company 23andMe. My family are a bit disappointed, but not surprised. We figured the results would be inaccurate. The part that annoys me the most is the fact the company did know in the past we didn't know what our race was. Also we would like to know our real family. This test was taken mainly to learn my family's true ancestry background, but 23andMe failed at being realistic and accurate.

The problem begins when the company claims the results would arrive 8 weeks. It in fact takes much longer than that. We were receiving strange messages on how they really do not know our ancestry. Also strange messages on how they lose DNA results or get them mixed up with other's DNA. My family were beginning to think they accidentally gave us someone else's DNA results. Then after a long time of waiting, the results are here. First I would like to share the Ethnic Ancestry results.

It is similar to Ancestry, with some results exactly the same as Ancestry.com. 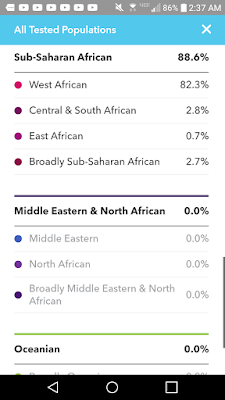 88.6% Sub-Saharan African countries and other percentages of West and South Africa. I study maps and learned to memorize world maps. So I remembered this would no doubt be the same countries that Ancestry showed us. There are a million reasons this cannot be possible. The Drumgole's, the adoptive family are descendants of these countries. So obviously this is somehow coming from their origins and not mine or my mother's. It seems like 23andMe based our results upon what my family identifies with and nothing more. Why say we are African American only because we thought we were and we were adopted by an African American family? 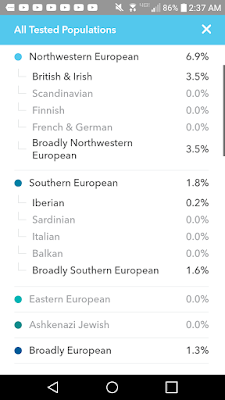 The exact same as Ancestry.com results. I am not sure if this is accurate or not. 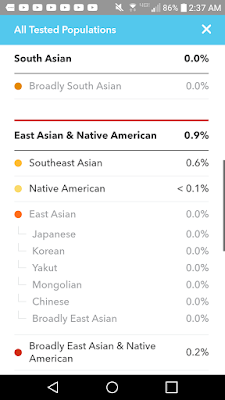 0% East Asian and Broadly East Asian. I know this is inaccurate. They did not get our Chinese, Filipino and Cambodian mix. I am rewriting this after learning I have a lot of Asian ancestry from several different countries. According to 23andMe, I don't.

When seeing this, we knew it was garbage. The other inaccurate results were physical characteristics, hair and skin. Freckles? Skin pigmentation? For hair, they had nothing, saying it is light or dark hair. The texture said our hair should match African American texture and colors. This is far from the truth. My family's hair is straight. Then what would explain my bright blonde hair? It turned more like a dirty blonde, but it change colors seasonally. My mother's hair change colors to jet black, brown and red. Many people are confused about my blonde hair (also my hair can change to brown and black). Yes, I was born with blonde hair and blue eyes. Everyone always assumes I'm half Caucasian, especially due to my supposedly "European" appearance. My mother believes there must be a European mix in my family's DNA. I get offended by this, because to me I don't look European and my DNA and parents shows I am not White. Everyone assumes my father is White since obviously my mother is Arab/Indian, but he is not White.

Eyes: It says 85% our eyes are a real dark brown, close to black. This is not true. Again, my eyes use to be blue, but then they changed to a bright reddish brown color, leaning more towards red. It is a bit funny, because my sister would be frightened of me because of my red eyes. They have darkened a bit. However in the spring and summer, they brighten. They are always a reddish brown though, but change colors to this red brown, bright brown and dark brown (not that dark).

Lactose Intolerance: For my mother, they said she is tolerant, but she is intolerant. How are they going to determine my mother is not lactose intolerant, when she is? I mean the whole health results were inaccurate and full of random illnesses that isn't true. I read how people are happy about 23andMe health side to their DNA testing. However, I don't believe it is accurate.

Then suddenly it changes the results, which confuses us. The percentage lowers to maybe lesser than 88.6%. A screen pops up that tells us the results may be for recent migrations (they meant the Arabian migration, but not for the Sub-Saharan). The eye color is high for light colors, like blue and hazel. My mother tells me I use to have blue eyes. The hair texture changed now that 90% our hair is straight and wavy. This is true. It's accurate I have blonde hair. I read the Arab DNA can be tricky, because when you look at the African locations, it's actually referring to the Arab descent of these locations. My family sent the company a message how inaccurate they were and how disappointed we were and still are. Strangely, they did not deny it was inaccurate. The company admitted to giving us inaccurate results, and apologized. This is when the results began to change.

Yet again, the results changed. It went back to saying we have dark eye colors, our hair is more likely to be straight and our skin is more likely to be light. It was also predicted that my mother doesn't have red hair, in which this is not true. Her hair often turns red in the spring and summer. I also read something very interesting about Saudi people and their DNA. It matched perfectly with my family's DNA, on how this company claims we have L haplogroup. I recently learned my family has the HV haplogroup. However, their new predictions of fair skin, straight and wavy hair, blue or hazel eyes doesn't match features of an African American. How can it change though from predicting my family has black skin, short curly or kinky hair and dark eyes, features matching native Africans to that? This is confusing.

Still 23andMe failed to find our real family like Ancestry.com was unable to. Instead, they brought us to those who are kin to my step-grandma. I recently found out she is not my real grandma. So the company showed us more of the Drumgole family, the family who adopted my mother. That proves 23andMe based my family's DNA on the adoptive family, and what we identify with. I did speak to a man who believed to have known information on my mother's biological father. However, it seemed rehearsed, as if my step-grandma told him what to say. Nonetheless, we were given a name of her father. I found out that my mother's father has Indian/Pakistani/Asian mixed ancestry. However, my family was privileged of meeting a woman who was also adopted. Yet, there was no luck in finding our real family. Not that I wish to meet our family. I feel it's no point in working hard to find people who threw you away, and who never made any effort or who has no interest in finding you. So, I have no interest in meeting my real family. I just would like to know where my mother came from, and the origins of my family's (mother and sister) DNA and ancestry.

Ancestry and 23andMe both claimed my family had high percentages from Eastern, Western and Southern Africa, mainly originating from the Sub-Saharan area. 23andMe results shown we had an L2 haplogroup. Like what I mentioned before, my family was confused about these constantly changing results. Recently, I read DNA testing companies are more relevant, broader and useful to those of European descent. I read how for non-White DNA, there is limited data to properly test our DNA. I also read how there is even lesser data for Middle Eastern DNA. When this happens, often DNA companies sets our results at default which is the Sub-Saharan African. Even if this is true, I believe no DNA testing company is 100% accurate even for Europeans. This made sense to my family.

So it would seem 23andMe pulled the results from Ancestry, adoptive family and a random generator. I believe due to this huge inaccuracy, 23andMe is misleading with their advertisements like Ancestry can be. Also it is a complete waste of money and time.
By Tikaani Moon at April 27, 2016