Finding the history of the house seems impossible. I contacted Anoka County historical society and also other places with no luck. Here is the issue, the house address cannot be looked up because it is like the house doesn't exist; they always tell us to give them a name, but it doesn't matter. If we have names, they are never in the database, so there is no point in giving anyone a name. When I search, only the current owner shows, nothing more. No one is willing to share any information with us, and there is no successful way in contacting previous owners that are still alive. They simply do not wish to contact us for some reason.

The city hall told us they can only go back to 1959, and gave us a list of names, but still they are not found in any database. I spoken with someone from the historical society about how old the house is. My family knows this house was built earlier than 1910. I study old houses and know this myself. Also, this house has a dark past which caused so much darkness to manifest. I wish to have the history of the house and the reasons why it was vacant many times, and did anyone else experience paranormal things. My family, especially me since I am writing the book would like to know everything there is to know about the house, including who built it and when it was built. This information seems like it cannot be retrieved however. All my family has to go by are paranormal experiences, visions and dreams, with nothing to confirm anything. We are even settling for someone who was familiar with an individual; who is related to someone who has either lived in the house or has been seen in the house.

For books, I study house styles for the US and recently Japan. Oh, also for UK. I found out through my research the house is considered a Folk Victorian, which is a little influence from Gothic revival. This house is very unique in style though, so here is the house. 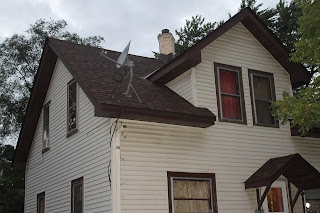 In the backyard and all throughout the yard, we have found many Native American relics, stones and items to indicate the house was built on Native American land (also with the embalming tools, bullet and among other items). I strongly believe from my research that it is on top of mounds, burial grounds. Now Archaeologists in the State and also the Anoka County historical society are interested in the house. They wish for us to allow the house to be a historical site due to the items found in the yard, and the odd story this house seems to have. Plus it is haunted. It is disturbing also, but my family has found carpet in the yard. When I looked this up, it always says this means there was a missing persons' murder that occurred. I decided not to dig it up because I felt strange about disturbing a grave even if it was murder and they were buried in the yard. My family is going to place flowers in the areas the carpet was found. Also since the Native American burial ground, I respect Native Americans. So I felt some parts of the yard should be left alone and should not be disturbed again. The backyard is strange though and looks like a burial ground and grave-site. There are many signs that show many has died in the house, and many has been buried on the property. I just wished we had documentation on the house, but we have none.

Soon my family will register the house into the Archaeologist and historical records. I guess the house will indeed become a historical site. Just did not expect it to happen this fast.
By Tikaani Moon at April 21, 2016