Serious Warning for the Curious in Proud Land House

Due to the high numbers of interested people, I had an obligation to warn those who gets too curious. It is ultimately your decision, but you are being warned. I advise to not perform any spirit communication rituals to connect with the spirits in the house, from our vehicle (Dodge Durango). I do not even recommend connecting with the spirits that were attached to our previous vehicle, a black Ford. We recently have a 2013 Equinox, but paranormal things has also happened in this vehicle. I advise you to not try and make a connection with the spirits or try and see if there are spirits in the vehicle. Here is the new vehicle: 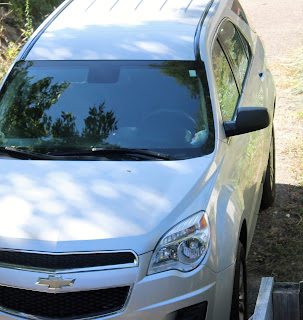 It is highly dangerous, and those who have performed these rituals have gotten into serious trouble. They are ruined for life. It does unfortunately include the last paranormal investigating team we contacted. The most disturbing event was the death of Mark and Debbie, the two ghost hunters. Mark and Debbie were actually interested in the Dodge Durango vehicle. This was their demise. The family did not see none of the spirits from the vehicle during that time. They returned after they were dead. This is a major reason we are warning those ahead of time.
By Tikaani Moon at May 22, 2016