In the Retro era (and Victorian era), it was most common that women wore headscarves such as this above. Also such as this below: Audrey Hepburn collage wearing different headscarf styles. I love Audrey's style more because she often wore Turkish patterns. That is why I have been purchasing scarves and patterns from Turkey and other Middle Eastern countries. I also found many vintage scarves (from Victorian to 1990's). However, don't forget the beautiful patterns from Native American culture. Here is another style I love: 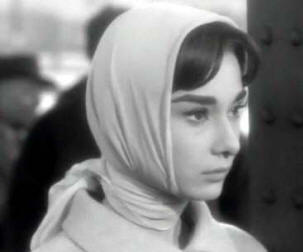 Audrey Hepburn again! Unfortunately, I am unable to wear any of these vintage scarf fashions. Just the other day, a man gave me one of most evilest looks. No doubt a bigot. My mother and I were ready for a fight. He clinched his fist and was stretching his arm out to punch me in the face. Man or woman, I never back down from a fight however. For some reason, the racists think I'm Muslim and treat my family worse than they already treat us. No matter which of these styles or what I'm wearing, it is the same reaction. My family was thinking for our safety, it is best not to become Muslim. There has been a tad of curiosity, but I can't.

With that note, I would like to argue about this assumption. Obviously if you research vintage fashions, anyone can see that this was a popular trend. I also love this accessory because many dolls wear them. Due to my facial features I suppose, there is an automatic assumption I'm Muslim. People even think this when I wear bonnets. Only people who think this are the racists. No one else does. It is quite ignorant of anyone to treat people so ill because of their religion, or fashion choice. My other argument is, I believe it is unfair to have so much hatred. I don't comprehend how they come up with their assumptions anyway; especially the most recent incident.

Despite of my experiences, I think more women should bring back all of these retro fashions. Where I live, I believe Anoka County, Minnesota and even most of Minnesota is becoming the most racist places in the U.S. I doubt other people would get the same reactions as me. They are beautiful and if I could, I would wear these scarves everyday.
By Tikaani Moon at July 31, 2016