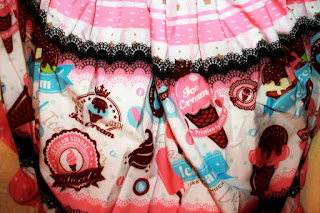 This is one of my favourite Sweet Lolita skirt, which is one of the first kawaii skirts I ordered. 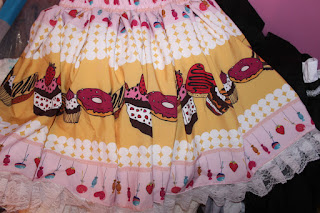 My second favourite skirt that I wear daily. These symbolize one of few of my interests as a Lolita wearer.  You know, kawaii things like ice cream, lollipops, donuts etc. I will share more of my outfits.
By Tikaani Moon at September 28, 2017 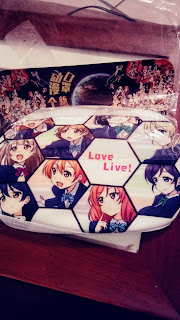 My new anti-dusk masks arrived from Japan. It is common to use these masks for fashion, which is what I plan to use my new masks for. This fashion is considered bizarre in the US, but it's unique and fun fashion to wear everyday. Often too, cute decorated gas masks are worn as fashion as well. This one above is from Love Live! 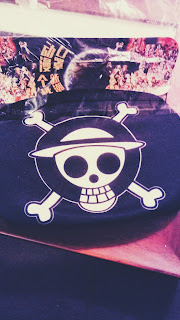 This mask is a One Piece anime one, which is my favourite anime series. This is the only anime series I watch. Well, Dragon Ball Z is my second favourite. 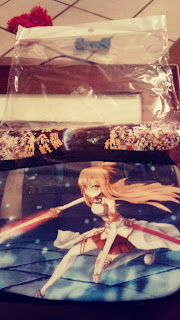 Asuna from Sword Art Online. I don't watch the anime, but I think Asuna is a cute character. 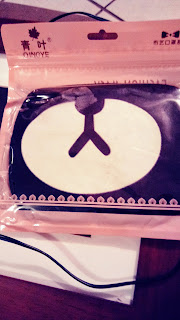 The last mask is a bear mouth. It's cute, and that's why I had to purchase this.

I have a ton of Lolita outfits, but I am unsure which of them would match these masks. I'm currently going through my outfits. Anyway, it's fun to wear these masks for fashion. However, some might associate it with some illness or disease, but I will still wear this due to my love of Decora or Harajuku fashion. More should wear these to normalize this fashion accessory.
By Tikaani Moon at September 20, 2017 No comments:

I have been going through physics courses when running across an article that claims professors have proved ghosts don't exist. Particularly this professor named Brian Cox because he believes our particles cannot exist in the spirit world. Also, the ghosts world would be overcrowded. Also too that mold can cause paranormal delusions. Scientists aren't alone in believing ghosts are fake. Most Pastors and Christians also don't believe ghosts exist. Yet, they believe in the holy ghost.

Having experience growing up in a haunted house, this I know is simply inaccurate. There are many paranormal investigators who captured physical evidence of ghosts. Let's just face it, science doesn't pair well with spiritual matters. It's a heated argument about this. Due to their so called evidence, humans are programmed to believe ghosts don't exist. That is not true at all.

I think people who disclaim ghosts are those who never experienced anything. So for those who haven't shouldn't really give comments. It is unfair to people like my family who has been living with ghosts for years.

I am unsure why people wish to disclaim the paranormal. Some say it's because it is beyond the laws of science and human understanding. I think they hate to admit there is something beyond death, and that unseen beings can be real.

Yes, the paranormal and life after death is one of the most misunderstood and puzzling subjects in the world. That is why we call it the unexplained. I have also spent years since 2004, studying the paranormal and life after death. It is most puzzling, but no one should debunk it as a hoax or mold only because you haven't seen a ghost. There are a few things that exist many hasn't experienced.

I am prepared for the criticism that is to come once I release the full story of my family's experience of living in a haunted house. We already get plenty of criticism.  I understand kind of to claim something you haven't personally seen as fake, because we live in a fake world surrounded by fraudulent people. However, I know what my family experienced. It was not some delusion. I need not the public or a scientist to determine what my family endured for years.

Another note, I wanted to add that the spirit world is overcrowded. You have no idea that many spirits walk among us everyday, everywhere we go. Their skepticism makes me continue my research proving ghosts are indeed real. It also strengthens my belief in my paranormal studies.
By Tikaani Moon at September 18, 2017 No comments:

Yesterday, my family discovered a site called Instacart. It is where you have shoppers to go to your local stores and shop for you. First, you find the items you need on the site, you pay for the items after putting them in a cart and then some person is assigned to go and basically go get the items and deliver them to the house.

I thought it was bizarre at first, and my family felt weird about using that service. Yesterday, we gave it a try however and saw it was a useful service to have. If certain items you pick out are not in the store, they offer something similar to replace it with. You can accept it, or either you can see other options. The entire time, there is an option of chatting with your shopper. You can always add other items if needed. My family was reasonable though, and tried not to be difficult.
It is important to have your phone available for when you are contacted. They may ask you questions at any time. Also, they inform you when they are done shopping. Different shoppers goes to different stores. Like my family has Target, Cub Food's, Whole Foods and Petco. Yeah, they can even shop for pet supplies. I found the shoppers professional, neat and fast. They deliver your groceries the same day. Also, the items are carefully bagged.

My family will be using this service a lot more then.
By Tikaani Moon at September 02, 2017