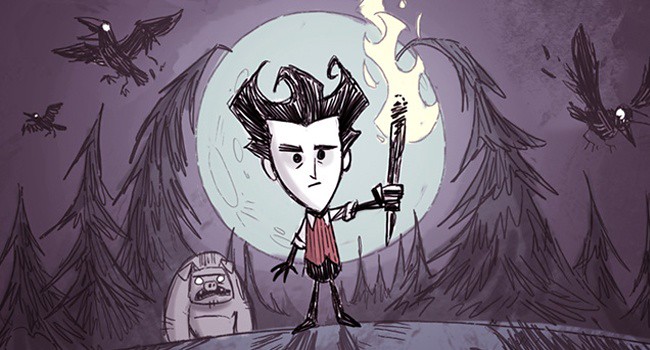 I first have to say, my family has became addicted to playing Don't Starve and Don't Starve Together. It is a Tim Burton styled game created by a Canadian Indie Company called Klei Entertainment. It was pretty genius. I first heard about this game through a Youtube video because my family was interested in purchasing more games. Also, it was after we recently purchased the Xbox One and Playstation 4, but we bought this one for the Xbox One.

Basically the concept is to gather needed stuff in the woods in order to make things for your survival. I didn't really understand the concept at first, but bought it anyway. So I played Don't Starve Together first, and I was first drawn to the Wendy character. I think she is my second favourite for her interesting character. So, I began picking up stuff and didn't get it at first. I was wondering what really was the point in picking up random stuff off the ground. Embarrassingly, I died the very same day, no, the very same minute. I didn't know the frogs could kill you at first. I found it really hard to quickly find stuff to make a torch before it was night. I couldn't make it pass 3 days, while my mother survived much longer than me, but she still died too.

We deleted and restarted several games before really getting the hang of things. Still, there's lots to improve. I love this game in particular, because it kind of gives you the freedom to generate your own world. Plus, there seems to be more purpose in this game I guess because it's not short? I am able to survive a lot longer than 3 days now. I am still new to this game, and so I am still learning how to play it. Now, I found a new favourite character, and that's Webber, yes, the spider. It's pretty weird how I always say how I hate spiders, but I love Webber. I also like how the spiders do not attack him, well, unless I actually accidentally hit one. It's also an easier way to get silk.

I am aware that having Webber though, you probably can't befriend the pigs, but any character I have, I find it impossible to befriend them. They always kill me before they take the food I'm offering them. Recently, I did learn about trading with the pig king for candy and gold. I just wished you were able to do something more with the stuff you find, although it's not too bad when you have to make things with gold.

The thing that is very weird, that bothers me is the glitch. Well, I could be walking, then all of a sudden, I can't walk forward, and then I'm sliding backwards and all over the forest. It really annoys me and I thought the upgrade would fix that, but no one ever fixed that problem. I'm not sure if others ever noticed this glitch or not, but while it can be funny, it can cause me to stop playing the game. The glitch happens constantly.

Recently, I was playing with my mother and we allowed others to join our game unintentionally. I'm still learning, and I was doing stuff I didn't know what it meant. First, there was a drunk guy who wasn't any help at all. He couldn't even find where we were at. It was very weird, because he didn't want us to know he himself was playing the game, but it was obvious he was.

Then this other guy from Poland, he survived for a few days, collecting some stuff. I could tell he was also a fan of Webber. Anyway, a few days later, in the game time of course, we found out he was killed by the Beefalo. It's just a habit that I pick up stuff I find. So, I picked up everything he collected. When he returned, he found out he no longer had anything he made and collected. I mean, where it was before. We couldn't hold our laugh in about the whole incident, and I think he got mad about the two incidents. So he left the game.

Then after a few weeks, my family discovered Don't Starve. I still don't understand the Reign of Giants and the other stuff, and how this game actually works, because I never really played this one. I just watched others play it. So far though, I am very much interested in the Shipwrecked one I guess because it's different. I really like the Don't Starve, but I dislike if you die, you lose everything that you established. I liked at least in Don't Starve Together, in the Wilderness version, you could have everything you built, even if you die.

For its originality and quirkiness, Don't Starve and Don't Starve Together has became my second favourites of all time.
By Tikaani Moon at April 25, 2018