Old Drawings (Getting Back Into Drawing) 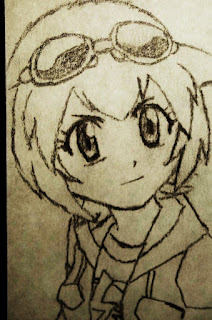 This is my old drawing of Madoka Amano from the Beyblade series. I have found lots of my old drawings like this. Back in I think 2013, I started practicing to draw Anime/Manga art. So I practiced by drawing existing characters to get the feel of the Japanese styled art. That was so I could draw my own Manga characters for reference.

I lost the patience to try and draw them for reference, but I have been able to sketch clothing. I gave up on trying to draw Anime, and went back to drawing sketches for my original Lolita styles. These sketches I will use for my living doll career. I sketch them and I (with my family's assistance) will start making the clothes based upon the sketches. I am currently trying to find my other sketchbooks to put them together.

I realized that I don't need to draw my characters. It's good enough if I have a character profile of each character, sharing their physical appearance along with personality, likes and dislikes. I learned Manga artists could base their character designs upon those profiles and upon reading a sample of their character in the actual Manga. Also, if you have some sort of idea of how you want your characters to look.