Current Read: An Eye for Glory: The Civil War Chronicles of a Citizen Soldier 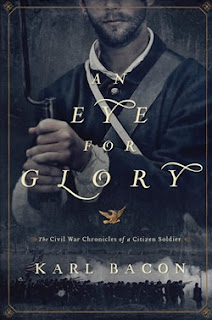 When I was active on Twitter, I met a writer named Karl Bacon. He recommended his book to me since I like reading about the American Civil War. I went on Amazon and purchased the book. Then I found out my phone couldn't download anything else. So I deleted a few apps to download it. Yeah, I found a new and better way to read and that's on my phone or kindle. I stopped purchasing physical books after running out of space to put them. My family had to start stacking books where it didn't make sense to put books at.

I am currently reading it, but so far, I find it useful and insightful to read about a real soldier's experiences in the Union army. It can be added for research. Here's a bit about the book....

"Michael palmer is a good man, a family man. But honor and duty push him to leave his comfortable life and answer the call from Abraham Lincoln to fight for his country. This “citizen soldier” learns quickly that war is more than the battle on the field. Long marches under extreme conditions, illness, and disillusionment challenge at every turn. Faith seems lost in a blur of smoke and blood … and death. Michael’s only desire is to kill as many Confederate soldiers as he can so he can go home. He coldly counts off the rebels that fall to his bullets. Until he is brought up short by a dying man holding up his Bible. It’s in the heat of battle at Gettysburg and the solemn aftermath that Michael begins to understand the grave cost of the war upon his soul. Here the journey really begins as he searches for the man he was and the faith he once held so dearly...."

I think I'll have to start from the beginning though because I recently got a new phone, and I forgot what page I was on. Anyway, so far, I did find this book realistic to life as a Union soldier in the American Civil War. For a Civil War researcher, you can find yourself visualizing the events, as if you are reliving the story as you read it.
By Tikaani Moon at May 09, 2018