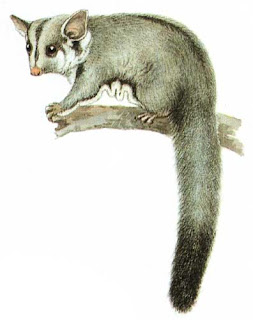 My family bought ours from Craigslist. My mother and I met this guy in a parking lot after corresponding with him through text about him selling his two Sugar Gliders to my family. I learned you can carry them around in a pouch, and they can be easily tamed, but they are extremely sensitive animals. You only get one chance for trust, and if you break their trust, you'll never get it back. It's also very important to always speak in a certain tone to them, in a kind voice. They can get easily hurt, meaning emotionally hurt.

They eat almost any fruit and vegetable, and they love yogurt. They will let you know if they don't like something you gave them. They'll spit it out. So, the two Sugar Gliders loved to cuddle, but I learned a bad thing where you cannot potty train a Sugar Glider. This is why we kept ours in the pouch if we let them out. They also have a weird smell to them, but they are cute.

They're like babies too. My family every few hours at night had to get up to feed them or either to give them attention. They really do love human attention, and they can't survive without it even if you have more than one, as so we found out. However, it is best to buy Sugar Gliders in a pair or more, and not alone. They can get lonely easily and fast. Returning back to the getting up thing, yes, I think my family didn't really get sleep when we had the Sugar Gliders. They will make a very loud cry for you. It's a little sweet, but it can be hard when you haven't gotten any sleep. My family took turns to allow each other to get some sleep.

The problem was that my family had a male and female Sugar Glider, and so they had a bunch of babies! We didn't know what to do with all of those Sugar Gliders we had. It was beginning to get overwhelming.

This is at the time we found out they were actually illegal to own in our State. I found out we could get arrested for owning Sugar Gliders. At the time, my family was not willing to move out of the country, but we really loved our Sugar Gliders. Once I have pets, I tend to baby them and I'm very protective of them. We did get contacted by people who wanted Sugar Gliders from countries where they were not illegal. My family knew we had too many of them anyway, and so we decided to sell them to the family we felt would take care of them. They were given to a guy in Canada.

I thought about our Sugar Gliders today, and this is why I posted this. I however know it was best to not keep them since they were illegal to own in the United States.
By Tikaani Moon at August 12, 2018