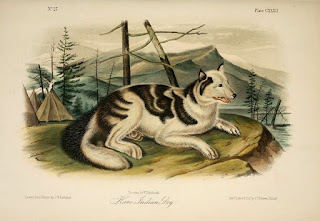 Extinct breed Hare Indian Dog. A dog from northern Canada. Gradually losing its hunting usefulness (aboriginal) among the Indigenous people. It went extinct in the 19th century and also lost its identity through interbreeding. Through years of crossing this breed with other dog breeds, the Hare Indian Dog lost its original ancestry.

Many of these Arctic Dog Breeds are becoming rare and extinct. Like the Hare Indian Dog, the Northern Dog Breeds are losing their usefulness as times modernize even further. Humans no longer have a use for dog transportation and delivering the mail by dog as John Beargrease of Minnesota did. Well, perhaps a machine would be better due to you must give account of the dog's health that must be maintained. However, the sled dog sport has a significant decline of those who are interested in participating in these activities.

Also, Northern Dog Breeds have a specific temperament that is not suitable for the average home. Some people have made them domesticated into a normal household, but some also have discovered behaviour issues when attempting to bring these Arctic Dogs into an environment they're not accustomed to. As these dogs such as the Canadian Eskimo Dog or the Greenland Dog, as they lose their usefulness, their population and demand is affected by it. I have read about the Greenland Dog and how it's not a dog suited for a normal pet type environment. Actually, most of these Arctic Dog Breeds have temperaments not fitting to be a pet type dog. Meaning, they're not really able to be domesticated in the same way another breed is.

What could be done about this? Perhaps some things were meant to exist only for a specific purpose. However, perhaps there could be more awareness of these dogs that could be spread. Uncertain if it's possible, but perhaps a middle ground would just be enough for these dogs. Introducing new environments to them, while still practicing their sled dog sport and allowing them to have access to cold climates.
By Tikaani Moon at September 29, 2018