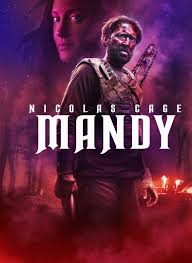 I usually don't do movie reviews because I don't like watching movies really. I sort of lost interest in watching tv probably because of the reason I needed to write this review. I just had to write this.

I first heard of Mandy on the Playstation 4 when it was being offered for 6.99$. My family wondered why it was so cheap, but I'm not sure if that's for new movies or not. We watched the movie trailer, especially how it was claimed to be one of Nicholas Cages' best performances. I must correct these reviews in saying no, that was not his best performance. Everyone knows his best was Ghost Rider. Knowing how good Ghost Rider was and seeing the trailer, I thought it would be a really good movie. I hate it when the advertisements are misleading because this one was. When looking at the trailer itself, I thought Wow, I have to see this movie. It looked like it would have been a good movie. I have to say whoever was in charge of the advertising, they really did a fantastic job.

So, my family rented it before purchasing it on the PS4. The beginning I suppose was okay. It was giving you the feel of the woodsy, creepy haunted forest thing. Then I was a bit confused when these sparkly neon words kept popping up on the screen. Something Mountain 1983 A.D.? I was wondering what is that? Because it looked almost like a movie title which was when I realized it was getting strange.

Half of the movie, there is just talking and weird psychedelic stuff. I assumed the movie would have more enticement in it based upon the trailer, but I was bored throughout the time I watched it. My family decided to stop watching it when the screen was a weird reddish psychedelic colour and things were odd. The movie is hard to follow. I still didn't quite understand the plot in which I feel the plot is very weak. This is when I fully realized it was a dumb movie and I no longer wanted to watch it. The movie was so bad, I didn't watch the entire thing.

I have to say, that is by far the worst movie I had ever seen before in my life. Very poor acting and the plot is weak. Elijah Wood is one of the producers? The guy from Lord of the Rings? Known as Frodo? Wow, he should be really embarrassed of that movie. Well all of these people who produced it should not feel proud of this movie. I tried giving Nicholas Cage a chance since I see he had been outcasted by hollwood and society. No matter if he plays in horrible movies, I feel the way his so called friends treated him was unfair. He was the one who went out of his way for his friends, his so called friends, but the minute he loses his status, those same people who he catered to spoke down upon him.

However, Nicholas Cage has been acting in some really bad movies. I remember too that Left Behind movie. No mean to disrespect, but I feel most of the Christian films are cheesy with bad acting anyway. Nicholas Cage needs to find better films to star in and much better scripts and stop being so cheesy. Due to how unfairly I feel he has been treated, I have been hoping that he would at least find a movie that would be as good as the Ghost Rider to star in.

This is a good example of how I'm disappointed in today's entertainment. All of it seems to be poorly planned or not planned out at all. Entertainment isn't as good as it use to be. It had more originally at first, but these days, everything is so cheesy and half done. It seems like these creators are not thinking things through before it goes out to us to view. Even the music artists. I feel they had more originally in the past, but not they don't.

Email ThisBlogThis!Share to TwitterShare to FacebookShare to Pinterest
Labels: Films