I have been busy lately with my several projects and work outside of my writing career. Plus, enrolling in college. I have been doing more research on the major I want to make sure it does cover web design, but I believe I did pick the right one. I have also been continuing my journey to studying different languages, mainly Russian. Well, I already can speak Russian, I just wanted to learn the grammar and learn how to automatically read more words. I would like to get back to learning Japanese because I do believe it has to be the easier language to learn for pronunciation, but not so much for remembering the characters and what they mean.

Lately, I've been working on one of my very first Fantasy books, you know, the one ready for publication now. Just one issue I need to fix regarding the chapters, and I think that would be it. I did get a cover design done recently, but I am not satisfied with the finished product. This is why I will hire someone else to redesign my cover. This is not the actual cover, but here is something where I'm going with the cover design, but I wasn't too satisfied with the finish... 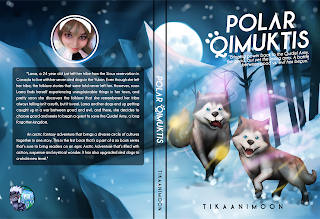 Many on this site assumed only because the main focus are the sled dogs that it is a children's kiddie book, but it is not. No, it isn't an adult book but sled dogs have been upgraded in this story to reach teen and young adult, an older audience. However, it is a good read for all ages. I just can't have any cover that is kiddie.

I have also been working on two separate series, one is another Fantasy series, the other is a Science Fiction series. I collaborated with my family on the title for the Science Fiction series and now like some of my newest projects, I now have titles for them. I am building the worlds of the different planets and developing the new alien races. I am obsessing over creating a truly fascinating world. This book I believe was influenced by my recently discovered family's adoptive background, and also the media. The main character from the Science Fiction series is a Russian American, born in Russia but raised by an American family. It does also discuss, I don't like using the term "Mental Illness" after working in the healthcare field for a few years and finding out this industry's schemes. Mental Illness technically doesn't exist, but it was just something that was created by the healthcare industry. I do discuss this in this series because the main character develops issues with self harm and the issues with stigmatization the healthcare professionals and society places on people who don't need anything but someone to talk to and to understand them.

Anyway, the other Fantasy series takes place in New Zealand because I dislike using the same countries, cultures and ethnic groups for my WIPs. This is more of a whimsical wanderlust type series sort of typical in what you'll find in British Fantasy stories. There are main characters from different backgrounds, United Kingdom, New Zealand, Georgia (country) and the United States. I found an older document of this book in my email and I wanted to use the original world-building and story development. All I'm doing is rewriting it from the older version which was actually when I first started writing years ago in my teen years.

The other updates, I have been purchasing gadgets to start my Youtube channel. The channel will feature my bedroom which is why I am transforming it. Also, so my room can fit my new lifestyle as a new Real Life Doll or Real Life Tikaani Moon. The channel will mainly be related to my writing, ancestry stuff, work and my Living Doll lifestyle. I may later on share makeup reviews and tutorials but this is much, much later on because I am still novice regarding makeup. I never wore makeup until now.

I will make sure to give more updates, especially share the hopefully better cover design.
By Tikaani Moon at February 20, 2019