I never realized how hard it is owning more than one dog, now I do. My sister wanted another dog and so my family has been looking for puppies for sale recently. Please note, we now have a puppy, I am simply sharing the story of searching for a puppy. I didn't realize neither how hard it is finding a dog for a reasonable price. It gets even harder when searching for a specific breed. My sister wanted a Japanese Chin or any breed that originated from East Asia because she loves everything related to East Asia.

I know how people lecture others on adopting a dog instead of purchasing from a breeder. However, the animal shelters do not make it easy for people to adopt animals. Again, I will mention the irrelevant questions on the applications like how long have you lived in your house, your work address and phone number, who are all in the household with full names, gender and age, among other questions I feel has nothing to do with adopting an animal. Most of the dogs were about 2 years old or older and never was potty trained, which is way too old to teach a dog this. Plus, they must get a house visit before they determine if they should give you the dog or not. I feel the animal shelters are way too uppity and their system turns off people from adopting animals. Well, it certainly turned me away from adopting.

I highly recommend "Four Paws and a Tail" pet store which is located in Blaine, Minnesota in the North Town Mall because this is where we purchased both of our puppies from. It was quick and convenient. This is the reason why I prefer to buy my dogs here or either from another pet store or breeder to eliminate the unnecessary headache animal shelters put you through in order to adopt a dog.

There is another huge factor and that is best to buy a puppy with a clean slate without any bad experiences. I remember my family adopted a Jack Russell Terrier from an abusive home. He aggressively attacked my mom the very first night he was brought home, and he ended up having severe aggressive issues to the point he needed to be put down, which is another reason I didn't know about adopting dogs. My family also had bad experiences when the dogs are raised around their parents, siblings and the breeder or person selling a dog. Due to this practice, in which the breeder assumes it is socializing the dogs, but it is getting them too attached to their environment, parents and siblings. I remember purchasing dogs like this and ended up having to give them back because they never adjusted to their new home and new family. In fact, I remember one in particular named Wolf, he never liked our family and wanted to return back home. So I believe the pet store environment gives them no chance to bond with the breeder and their family, so they will easily move into their new home. This is why I recommend Four Paws and a Tail. 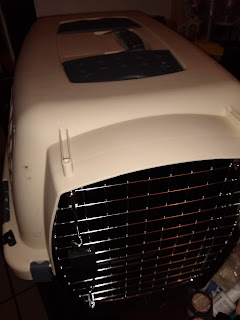 We set up the cage to go to Four Paws and a Tail. After having such a hard time purchasing a dog, we decided to go back to this place. 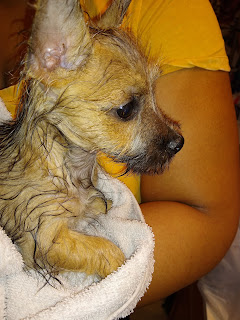 We got the puppy from the mall and had to immediately be washed after pooping in the cage. This is one of the first pictures taken of the puppy. He is a Cairn Terrier and if you don't know this, this is the very same dog breed used in Wizard of Oz known as Toto. My sister wanted him to have a Japanese name in honor to the Anime she watches and her love for Japanese culture. She originally picked the name Tomoaki but everyone else had a hard time pronouncing it, all but me because I am studying Japanese and learned Japanese words and names are easy to pronounce. However, we found a shorter and easier name and that's Tomo. So his name is Tomo which is still a Japanese name and it sounds similar to Toto. 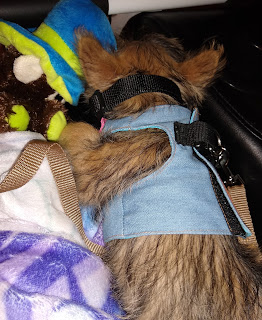 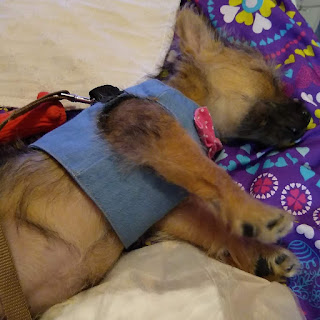 Due to having a new puppy, it is a lot like having a newborn baby. Tomo didn't whine as much at first, but now he whines quite a bit. My family hasn't been able to get much sleep with him around. I haven't been able to get any writing done at all because by time he's sleep, I am too tired to do anything else but go to sleep myself. It's best to take a nap whenever he's sleep or you'll miss the chance to get rest. I want to get back into releasing my book, Polar Qimuktis but it's hard to squeeze in time for writing.

It can be hard taking care of more than one dog in the house. The first day is good, but when their personality comes in, which is in a few days or a week, most of that excitement of getting a puppy vanishes. They're cute online, but you must factor in it's a big responsibility. I usually stay up at night writing, but now my family is caring for Tomo. He adjusted well into his new home and adjusted to us quickly.

I will give a review on owning these dogs. First, I noticed Tomo behaves a lot like our current dog, Scotty. Both dogs are watching television which I think getting the channel, DogTV is a good way in training your dog to watch tv. 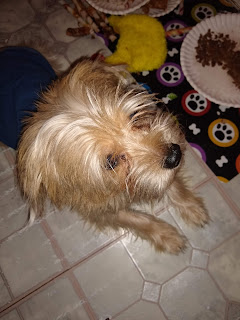 Scotty is a Morke which is a designer dog, Maltese + Yorkie mix and he also was purchased from Four Paws and a Tail pet store in the mall. He is now 2 years old, but I remember his first day. 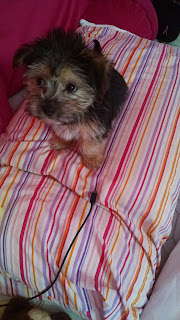 Scotty was a baby and I will always see him as a baby. We had just lost our dog, Tangie and it was hard to get another puppy then. We just decided one day to get one from the mall. It was an emotional day because we weren't over the loss of our previous dog who was a Yorkie. Scotty was mischievous just as Tomo is now and he loved to play bite which brings me to the topic...

It is best to start early on grooming and preventing food aggression. Also I did learn it's good to not allow a puppy to bite you, in which Scotty and Tomo did as puppies. If not, they won't grow out of it and might bite you too hard, breaking skin which it becomes less playful to the person. People often make the mistake of thinking puppy bites are harmless and cute and never teach the dog not to bite. I learned it's best to gently redirect the puppy into biting on toys and bones instead of on you. Tomo wasn't doing anything the first couple of days, but now his personality came out. He loves to run around, explore and play. Yes, as I read about the Cairn Terrier, he has the potential to dig and that's a big no-no since my family has a garden.

Cairn Terriers are known to being feisty and hard to train. This is true. I do believe the Cairn Terrier is a difficult dog breed to train and it is a breed only for experienced dog owners who has dealt with stubborn and difficult dog breeds. Like what I read how hard it is to potty train them, this is true. Tomo refuses to be potty trained, in which smaller breeds are able to be pad trained like Scotty is. Tomo is not yet, but I am training him. He's an adventurous exploring puppy who loves to get into everything and bite on everything in sight. He never chewed up anything because I don't give him the chance.

Our experience of owning a Morkie is that I noticed how stubborn Scotty can be. He is a good dog though and perhaps would recommend it to inexperienced dog owners. I noticed the Morkie behaves a lot like Jack Russell Terriers. He has a personality that reminds us of our previous dogs. The Morkie has a sensitive stomach just as the Yorkie. He's very playful and intelligent and would make a good guard alert dog and companion.

He hasn't been eating his puppy food, but my family does not believe in starving the dog until they do. Puppies are like babies and cannot go without eating in 24 hours. We don't put our dogs on a schedule because my family believes it is not necessary to. Our dogs get 24/7 access to water and food due to them having access to the bathroom all the time as well.

Scotty avoids Tomo which is a good thing. It's better than what my family expected because we thought he would attack him. We found out he is unsure and I do know a nervous or scared dog is unpredictable. So we make sure they keep their distance until they warm up to each other. Introducing a new dog to the current dog can take time and needs to be handled with caution and patience. You must make sure it's in a controlled environment when getting them to meet. Do it slow so nothing bad would happen. Like we always have Tomo on a leash and since Scotty poses no threat to Tomo, we do not leash him but still caution the time they look and are near each other. Tomo is on a leash so we can always snatch him up just in case. Scotty is nervous around Tomo which was why we allowed both of them to have their own space until they are friends. No, I don't believe in the "expert" advice in getting a male and female dog in order for the dogs to get along. My family had to do what was best for our house and getting two males were to avoid being stuck with a bunch of puppies. No, we also don't believe in neutering our dogs and this I noticed has prevented our dogs from having the humping behavioral problem, versus one of our previous dogs who were neutered and developed this problem.

Having more than one dog means double the clean up and double shedding. We are trying to get Tomo use to grooming because he is a dog breed that requires fur trimming again to prevent aggression later. It is really good to stop behavioral issues and getting them familiar with things early on.

So anyway, I hope Tomo and Scotty gets along soon. Due to our new puppy, I haven't had enough time to post or write, but I'll make sure to keep three of the blogs active. I will post more pet updates as well.
By Tikaani Moon at March 30, 2019