Writing and Pet Updates (and More)

I'm still not a hundred percent but I realized a week went by without posting anything. I wanted to share some updates for writing and I decided to include pet updates here since I haven't been able to write up one for the pet updates. Here, I will also answer some questions I've been receiving. Anyone is able to ask their questions so I can answer them in a post...

Recently, I have been trying to get some writing done. I haven't worked on releasing the first Polar Qimuktis book, but I have been working on finishing the second book. Well, trying to. I am currently at 176 pages. I know it's slow progress, but I'm trying to get back into a steady pace and a habit of writing everyday. Yes, I have a long way to go, but since I have the entire book outlined and planned out, it wouldn't take that long to figure out what to write.

Well, this isn't the only writing project I've been working on recently. I recently titled my Epic Fantasy with the demon POV and I finished outlining 3 of the books for this project. 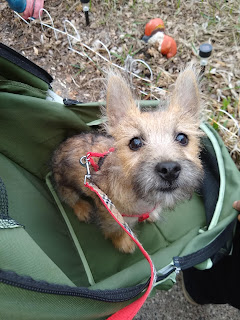 Toto some days have been a hand full. No, we still haven't been able to get two of our dogs to get along, which means it still has to be monitored every time they're in the same room. It is hard to tell if Toto wants to play with our other dog Scotty or is he trying to fight him since he all of a sudden tries to chase Scotty. Also no, we haven't stopped Toto from play biting, in which nothing has worked to stop him. He has a lot of energy which makes me wish sometimes my family was able to have a cat instead of a dog. Unfortunately, we're allergic to cats. My family has been getting Toto use to walking free and oddly he behaves better off a leash than he behaves on a leash in the house. However, outside, we must always have him on a leash because he is a runner and doesn't come when called.

Since I added the pet updates to this post, I'll just share my review of the Cairn Terrier now. As I read after buying the dog, this breed is rough and tough and has lots of energy. I can tell this is a hunting dog how Toto tries to hunt our exotic animals. I am unsure if I would ever get another Cairn Terrier though because of how hard it is dealing with them. I'd say it's difficult to train the Cairn Terrier with specific things, but Toto looks for guidance which indicates the dog is teachable. I notice how stubborn Toto is though, and how quick he'll challenge the person trying to discipline him. He enjoys spending hours outside and running around. He is also an explorer, but that also means, he loves getting into everything. Because of this, it's required to keep a closer eye on this one. I think that's how most Terriers are. I know Terriers are feisty, rough, energetic and some can have a meanness, but it's something that attracts me to Terriers. They're one of my favourite breed types. However, I only recommend Terriers to those who are willing to deal with a dog who will get into everything, loves to explore, loves getting into loads of trouble, is feisty, can be overly hyper and is a rougher dog. I guess I like these dogs because their resilient, tough, entertaining and even though they can be a hand full, it's something about them that makes their mischievous behavior worth it.

Some Questions to Answer

I noticed some questions I wanted to answer now before I forget to.

Are you Russian? Can You Speak Russian?

I get this question a few times, especially since people tell me I look more European. First, I must note I am American, but I recently learned I have lots of Russian relatives and I do have some percentage of Russian. I am unsure of the percentage though, but I only know most of it comes from the Turkic population. Well, I am not entirely sure about that.

I can speak Russian, and many have noticed I greet and thank them in Russian, which is something that has became instinctive. I write all of my posts in English due to my computer that doesn't accommodate Cyrillic or other special characters. So I am only able to write in Russian on my phone, but I can't write very well on my phone for some reason, especially long texts. I know it's strange, but this is the reason I have to write posts on my computer. However, I can verbally speak Russian fluently.

To answer the other questions, I am currently learning Turkish as well and I can speak some Turkish. Also, I am mixed race and would prefer to be identified as biracial or mixed race because I do have mixed ancestry. Most cover the Mediterranean region.

For now, I can only answer those questions. I will add more to this later. I just don't feel too well but I am trying to keep the blogs active especially since I am going to be a newly published writer, and will finally have a book available.

Email ThisBlogThis!Share to TwitterShare to FacebookShare to Pinterest
Labels: Updates