On my other blog, I announced our new pets. At that time, we only had two Guinea Pigs, but now we have five female Guinea Pigs. I wanted to share experiences about owning them since seeing these sort of stuff online. 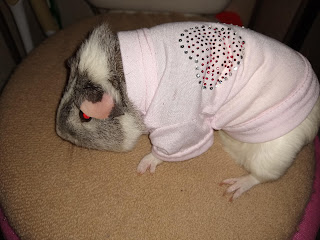 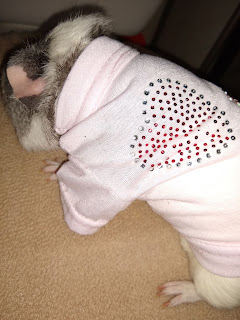 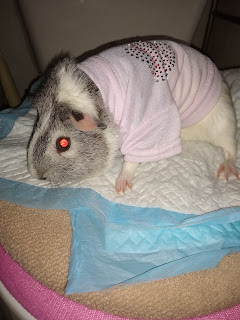 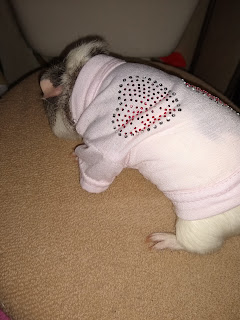 This is one of our Guinea Pigs named Bun Bun. We put this shirt on her only for the picture because she has a heart shape on her left ear. It reminds me of the heart shaped birthmark I have on my right leg. This is one of the first Guinea Pigs we purchased with another named Putina. They didn't get along which was why we had to keep them separated for a long time. 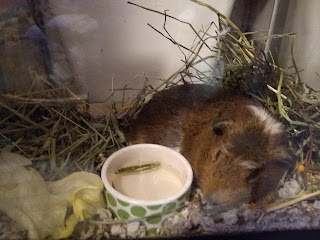 This one is called Coco. This day, she was sick and needed to be separated from the others in order to be brought back to health. She loves her treats in which you can only find at Walmart. Our family bought her from Petco. She was surrendered by her previous owners, but before thinking poorly about the owners, we were told why she was given away. Coco does not get along with other Guinea Pigs, in fact she is very violent toward others. Our other Guinea Pig, Putina, she pulled out the fur from her back and wouldn't allow our other Guinea Pigs to eat in the cage with her. I do notice when you separate them for a few days and reintroduce them, they usually become submissive. If they do not, it does seem a new Guinea Pig is needed in order to mellow out the troublesome Piggy. 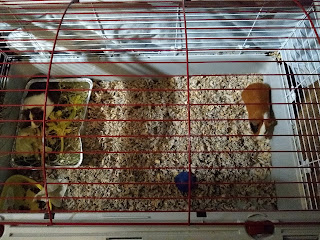 The yellow thing on the left is their toilet. We are trying to potty train our Piggies, but they get very mean and currently does not want to be potty trained. We're still working on it though as you can see. 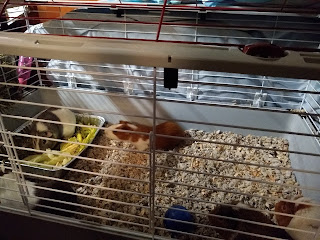 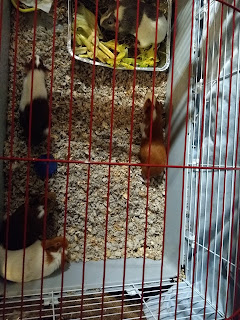 If you are wondering which one is Putina, she is the one in the corner in the left nearest to the camera. The one with the white body and brown face. In this picture, you can see Bun Bun not sharing the food. She would bite anyone who tried to eat anything out of the pan too. 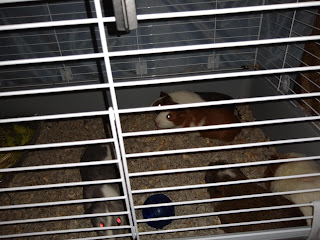 We recently bought two more Guinea Pigs, which is the ones you see in the right corner farthest from the camera in the last picture. The brown one is Caramel and the black and white one is Baby. Actually, you can also see them in the first picture.

I have to say, it is a lot of work caring for Guinea Pigs. There's a lot of clean up, training, feeding, grooming and supervising. When we reintroduce them together, we must always watch them carefully to monitor their behaviour between each other. Training and supervising them can be time consuming. I do recommend Guinea Pigs to people who does have the time to actually deal with them all day. My family has a ton of stuff to do, but they can get you away from what you have to do everyday if you're a busy person.

I didn't realize this at first, but I noticed our Guinea Pigs must be trained, almost similar to a dog due to their identical behaviour. They are very destructive and mischievous animals who needs constant reminder who is boss. Since Guinea Pigs go by rank, they often tend to challenge the owner. A stern no and disciplined training will keep them from turning on their owners. Now I realize my family must treat our Guinea Pigs differently than we treat our other pets. When spoiling them too much, they tend to become very mean and it reverses the training.

Our Guinea Pigs are always fighting for dominance, which makes me question are they really social animals. Putina, one of our Guinea Pigs prefers to be in a cage by herself and becomes territorial when putting other Piggies with her. She's a lot different though from when we first brought her home. She was a very mean bully, but then turned into a passive and submissive Piggy to all of the other Guinea Pigs.

Our Piggies goes into rebellion stages almost everyday where they'll refuse to eat and become picky on what is fed to them. They eat lots of lettuce, and can run through about six lettuces in a few hours. They eat quite a lot all day since they are grazers. They just seem like very greedy animals who does not like to share at all.

We clean the cage everyday due to the mess they make. During their dominance fights, they spray each other which can be disgusting that they urine in each other's faces for dominance. They have other strange behaviours for dominance as well. This causes lots of problems though. It can be frustrating too when we just washed them, only to spray each other again and they return to smelling and being dirty. I do notice Piggies tend to always have a weird odor to them.

One thing I didn't realize was the many diseases Guinea Pigs carry, and it can be transmitted to a human through the feces, urine, saliva, bites or scratches, according to King County. I notice developing nosebleeds each time we clean out their cages or is in direct contact with them. This is why we usually do not hold them without a puppy training pad. The bad part is that they eat their own feces and being that they urine on each other, contaminating their bodies and mouth, it can give a higher risk of infections and other contamination. That is a major reason I don't recommend kissing a Guinea Pig or allowing any part of them in your mucus membranes (mouth, ears, nose, and eyes).  I don't also recommend using the bathroom right after handling them without proper handwashing. I discovered you can develop serious bladder and yeast infections. This is with most small mammals, being that they are in the rodent family. It can also be bad since they shed off lots of fur every day. Our family can now find their fur on our clothes and furniture, which was why I started combing and brushing them.

One behaviour which I found was strange, was when our Piggies place their mouth and nose together and move their heads up. When Googling it, it was said this was a good sign they are playful and happy with each other, but I learned this is not always the case. Well, our Piggies, they do this to establish rank and before they begin fighting.

I will make sure to give more updates on our Piggies soon.
By Tikaani Moon at November 13, 2019