Before the weekend ends, I wanted to give an update, but never got around to doing it until now. Just a few hours ago, I had a thought to post for the weekends since it seems more convenient for me due to my health which hasn't improved at all. My health has been a reason I've been absent online. I recently decided to uninstall Whatsapp and give up on iTalki again. I was disappointed by the behavior of the language partners and teachers alike. There was only a few I did enjoy meeting, and it was a nice experience to finally speak to people from Russia.

Since the Polar Qimuktis book has nearly 700 pages I believe, editing continues. I'm on chapter 19, but I hope to read and edit faster. Unfortunately however, my health limits the time I could do this. I must take more breaks, but I do go back right to work later. I've also been trying to work on finishing volume 1 of my Shonen manga, which is the first manga I will publish. I updated the volume list, where I map out each volume on what will happen in each one. This is how I will know how the story will go when filling in the blanks.

Let's end it there for some Piggy updates. I know some at Petco have been wanting me to post updates about the Guinea Pigs we bought and I just wanted to do it now. First, my family tried listening to the Guinea Pig experts in allowing them to remain in packs, but most importantly, never interfere even when you see Piggies bite one another. Let them work it out on their own. Well, this was disastrous and we learned it wasn't good to allow Guinea Pigs to bully other Guinea Pigs. After observation, I do see it more so as bullying than leadership. So now, the Piggies all have their own separate cages and they seem happy without each other's company. It did result in violent fights, which was why we did have to separate them. 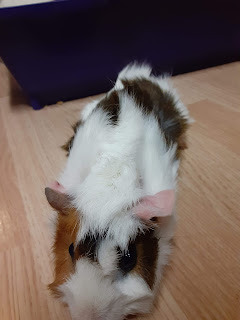 Here is Cookie, also known as Tough Cookie due to her mean personality towards other Guinea Pigs. I named her Cookie because her facial markings reminded me of the brown part of a Chocolate Chip or M&M cookie. Also however, if you look loser, she has a little KISS thing going on where her facial markings can remind you of the KISS band. We actually did not buy her from Petco but Petsmart. We 3 other baby Guinea Pigs, but Cookie is a bully which is why she cannot be with the other babies. However, the adult Guinea Pigs violently attacks her into a corner, not allowing her to walk around or even eat, which I feel isn't fair, even though others have advised to allow this. 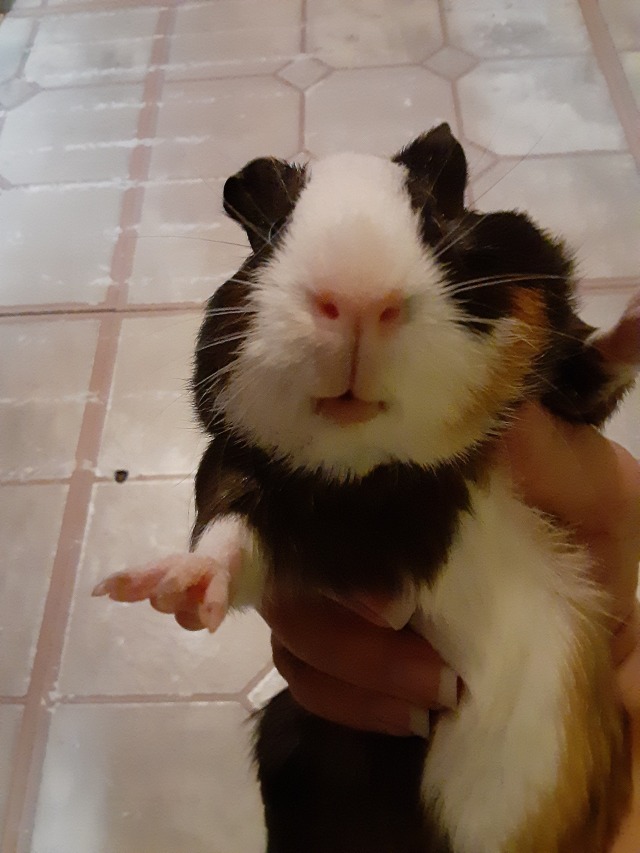 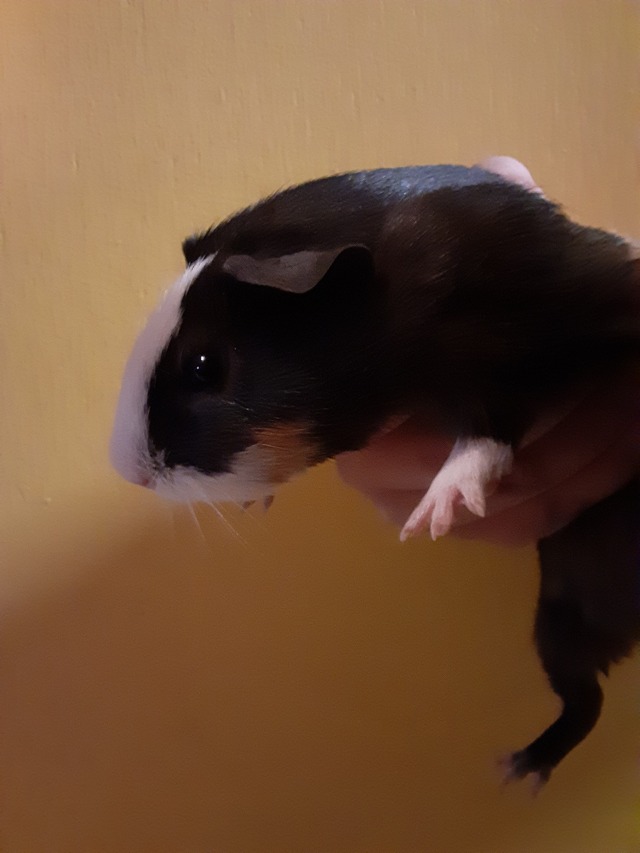 And the newest member of the family! We name her Oreo! Actually I named her Oreo because her face reminds me of an Oreo cookie. My mom told me how the worker at Petco said how she would miss her and wanted to see an update. Sorry it took so long, but please know Oreo is doing more than fine. She is doing great in her new home. In fact, she is very happy where she is. I'll make sure to post regular updates on the Piggies. Just as described, Oreo is actually the sweetest Guinea Pig we own. She approaches our hands. We can pet her, but she's still not use to being handled. This was why I had a hard time taking the picture of her. We're continuing to work on Oreo getting use to being held, but we are allowing her to take as much time as she needs. She kind of looks like our Caramel as you can see below... 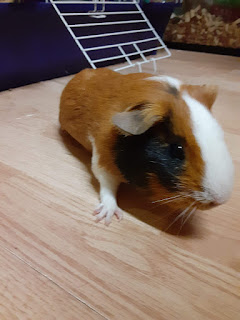 Yeah, I think Oreo and Caramel have similar markings and look sort of similar to each other. Like Cookie, Caramel was bought from Petsmart. Wow, she's grown so much. She was just a little baby at first bossing everyone around. We immediately knew she could not be around other Guinea Pigs when she seriously injured our baby Piggy named Poppy, leaving a large hole in the back of her neck. I think two Guinea Pigs did this to her however. Still, Caramel was caught viciously fighting the others which was why we pulled her out and purchased a cage for her, but all of the Piggies ended up being separated because of their ridiculous fighting. I grown to love Guinea Pigs, but the one thing that bothers me is their meanness towards one another. I just wish they would coexist without having to rank each other, bully, not allow the other one to eat, biting and all that other stuff. Other than that, I like Piggies. Caramel though, is the toughest Piggy we have. Nothing seems to scare her. We call her the mini general. 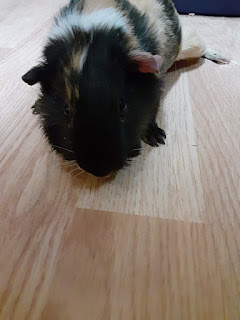 Here is Poppy, the one I mentioned above. This photo is before the injury which is why you do not see it in this picture. Poppy is our second baby Guinea Pig we own. At first we tried pairing her with Oreo, but it never worked out because she would always bite and chase Oreo away from her every time she was near her. So we took her out and returned her into the cage with the pack. Recently, we discovered what was going on within the Piggy pack with Poppy. I never knew why she stood in the corner of the cage, facing the bars. When trying to move her out of the corner, I assumed she wanted to be in the corner. This month was when my family caught all of the Guinea Pigs violently attacking Poppy every time she would try to venture out the corner. Thinking about it, it made sense why she was the smallest out of them all because they did not allow her to eat much food. That's when the other Guinea Pigs were removed out of the cage for a cage of their own, and Poppy was allowed to have a big cage all by herself. Pretty soon, she was beginning to popcorn, be more happy, eat more, she was no longer the smallest Piggy. Currently, we're caring for the wound on her neck. 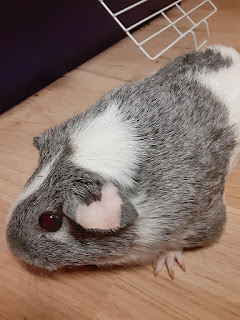 Bun Bun, one of the first Guinea Pigs bought from Petco. She is still doing good. I would say Bun Bun is one of the most interesting Piggies we have. She has sass, attitude and a lot of demands. If she's mad, you'll know because she squints her eyes and stomps her back legs. She has a weird way of telling us she wants food. Either she'll sound like a Chipmunk, make a loud screaming noise, or she'll quiver her lip with water in her eyes. She especially has tears for lettuce, for Bun Bun is very passionate about her lettuce. That's actually her favourite. When we run out of lettuce, Bun Bun gets really angry and we make sure to go to the store to restock on her lettuce. Yeah, our Piggies are spoiled. My mom always ask me which Guinea Pig is my favourite, and it would have to be Bun Bun. She may be sassy, but Bun Bun also is very entertaining and interesting. 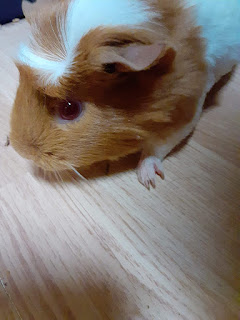 I uploaded a few pictures of Putina on Instagram and there were surprising responses from Russians. Looking up names, I wanted to give her a Russian name. I know our family do like the Putin family. So I named her Putina; I think it suits her. Putina was another bought from Petco. When she was first brought home, she was obviously leader over Bun Bun and often bullied her. She would not let Bun Bun eat anything and would often chase her around. One night, my mom decided enough was enough and pulled Putina out of the cage. They were separated where Bun Bun was freely able to eat, walk around the cage as she pleases, and no one telling her where she can and cannot go. We bought two baby Piggies for Bun Bun, but it ended up in disaster. For some reason, Putina submitted to them and Bun Bun. After that, she started losing her leadership rank in the pack, but she's still very mean. She even bites and sprays you when trying to hold her. Recently, she's been trying to become a leader again. Very interesting, but Putina recently has been wanting to be more independent in finding food. She refuses to eat anything we offer her and prefers to find the food herself, and so we have to set it up so she can think she did find it herself without our help.

Unfortunately, Putina contracted the same sort of illness our previous Piggy had who was bought from Petco as well. They would know which two Guinea Pigs I'm talking about; they were the ones from the family who were deported back to Vietnam. That was why we immediately took them in. However, I did not know the two Guinea Pigs were sick and contained an illness that would kill some of our pets. I probably would not have wanted to get them if I knew this. I'm sorry. Putina is not dead, but she is sick and does not look the same as she did in this photo. I tried researching about what the ones we bought had, and what comes close is an infection which is the same as a rodent who invades your home. This is why we're advised to take precautions when handling Guinea Pigs due to the fact they are rodents. 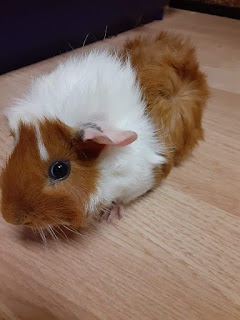 RIP Little Sakura. One who caught the illness. Very unfortunate Sakura wasn't able to grow up. It use to always be Cookie and Sakura. They were always together. 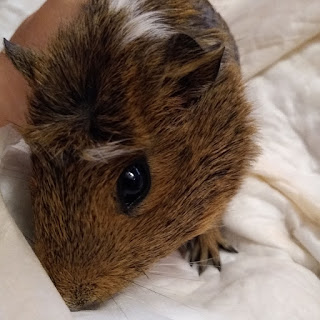 Coco had also died from the illness unfortunately. When bringing this one home, she would always have every Guinea Pig lined up against the cage, unable to move or eat. Others say this is leadership, I said this was unfair to the other Piggies that they were not able to walk around freely like Coco and eat, popcorn and get water. After awhile though, she ended up sitting in a corner, making very loud noises for everyone to get away from her. Even though everyone claims Guinea Pigs are social animals, Coco did not want to be around other Piggies. She much preferred to have a cage to herself. This was when she stopped screaming bloody murder and she stopped misbehaving. Coco will always be remembered. We still have her bite marks in our hands left as scars as a reminder of Coco as long as we live.

So, this was a long post and I think I'll leave it there. I'll make sure to post whenever I can.
By Tikaani Moon at February 16, 2020