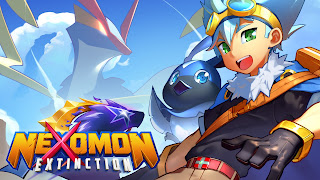 I found this one when browsing through new games on my Xbox One last year in 2020. I've been recently drawn to Anime games. I read it was similar to Pokemon, and so I played it. In the beginning, the game ask who are you? Then you select an avatar (either male or female). Then the game begins as you as an orphan trying to have a master badge for Nexomon taming. First though, it foreshadows a story where they claim you betrayed them all. It sort of makes you wonder how would you betray them? What let up to that point in the story? Actually, I find the story my favourite. It's so interesting, I play for hours just to know what'll happen next.
As soon as I started playing, I ended up only playing this game. Since I like this game, I definitely would like the Pokemon game. I've always wanted a Pokemon game. I watched the Pokemon series, but never played the game. I have a Nintendo Switch, but I am not sure why I've held out getting a Pokemon game. I am still on the Xbox, while my family's been playing the Switch more than I have. Actually, I don't think I ever played anything on the Switch. I plan to when we move.
However, I find Nexomon filled with interesting Nexomon, characters, settings and story. I think Nexomon is truly an underrated game. I've spent hours collecting Nexomon and leveling up my team. Sometimes, I had to Google where to find specific Nexomon, but this is why you have the internet to assist with your gaming.
Due to the moving process, I've missed playing this game. I haven't finished the story
By Tikaani Moon at June 05, 2021